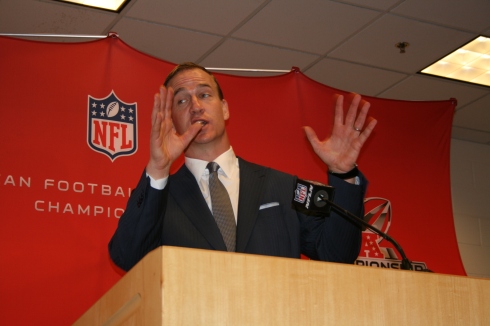 A little more than two years ago, coming off multiple neck surgeries in 2011, Peyton Manning didn’t know if he would ever play tackle football again.

Sunday, at age 37, he capped a record-breaking regular season by leading the team he joined for his second act, the Broncos, to a 26-16 victory over the Patriots in the AFC Championship Game. He’ll be returning to the Super Bowl for the first time in four years. For the Broncos, it’s been 15.

Dave Krieger is a recidivist newspaperman. END_OF_DOCUMENT_TOKEN_TO_BE_REPLACED
This entry was posted on Sunday, January 19th, 2014 at 7:41 pm and tagged with Peyton Manning and posted in Broncos/NFL. You can follow any responses to this entry through the RSS 2.0 feed.
« From open heart surgery to Super Bowl in 2 1/2 months
A Super story »