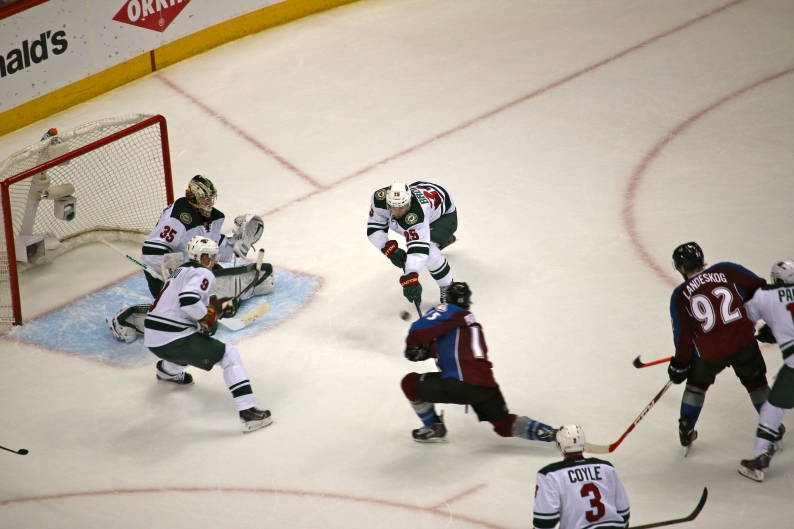 P.A. Parenteau scores the tying goal with 1:14 remaining in regulation in Game 5 of the Avs-Wild playoff series.

This is beginning to get on the State of Hockey’s nerves. It’s not just the aggrieved Minnesota coach, Mike Yeo, who seems to believe his team should be up four games to one, which would mean it wouldn’t have to play Game 6 on Monday night.

Here on Earth, his team is down three games to two after the Avalanche tied a game very late for the second time in the series, then won in overtime, 4-3.

The reporters covering the Wild seemed as offended as the coach. One asked Yeo if the Avalanche was just lucky. Another mentioned how the penalty calls were, like, totally unfair.

That was certainly how Avalanche power forward Gabriel Landeskog felt when referee Brad Meier gave Minnesota a power play with 4:33 left in regulation and Colorado trailing 3-2. The Avs captain had come to a sudden stop in front of the crease, spraying Wild goaltender Darcy Kuemper with snow. This is a violation of hockey etiquette, such as it is, requiring the usual pushing and shoving. It is often accompanied by a stern warning from the referee. It can also be a penalty for unsportsmanlike conduct, depending on everybody’s mood.

Meier chose this moment to make it a penalty for unsportsmanlike conduct. It was a terrible penalty for the Avs, who needed all the time available to try to tie the game. Now they would have to waste half of it killing a penalty. Landeskog had an extended conversation with Meier on his way to the penalty box and it did not look like they were making dinner plans.

Make it he did, which meant Avs coach Patrick Roy had to wait to pull goaltender Semyon Varlamov until Landeskog escaped the box two minutes later.

“It was hard to remain calm after the call,” Roy said. “But when I look at the clock, it said we’ll have two minutes and some seconds; then we had to kill that (penalty). That was a huge kill. The penalty kill was without a doubt outstanding for us tonight. The guys did a really good job. They sacrificed their bodies, they blocked shots. I was very happy with them. They gave us a chance to win this game.”

By the time Varlamov got off the ice, about 2:20 remained, or 41 seconds fewer than in Game 1.

Didn’t matter. The Avs are getting better at this 6-on-5 hockey, which Roy has them practicing at every morning skate. They didn’t score until 13.4 seconds remained in Game 1. Saturday night, they tied it up with 1:14 to spare. Eighteen-year-old Nathan MacKinnon took over, as he did in Game 2.

In the feverish 6-on-5, MacKinnon brought the puck up the left side and slid a pass to center Paul Stastny near the left post of the Minnesota goal. Stastny tried to drill it through Kuemper from the side, but it bounced off the goaltender to the side of the net. Stastny regained control and slid it toward center ice in front of the net. Landeskog was coming down the slot, ready to take the shot, when P.A. Parenteau swooped in from the right, stretched as close to the net as he could, his knee almost touching the ice, and flicked the puck past Kuemper’s glove to tie the game.

“I was just coming out of the penalty box, so I was a little pissed off,” Landeskog said. “I certainly wanted to put one home and I wanted to tie it up. When I saw P.A.’s puck go in, it was certainly a good feeling. The fans, I’m surprised nobody gets a heart attack when this keeps happening. It’s exciting, but we don’t want to make a habit of it.”

But why not? Everybody loves cardiac kids. As Roy pointed out afterward, that’s entertainment.

“Our fans had a heck of a show here tonight,” he said. “And hopefully we’re going to give another good one over there as well.” Game 6 is Monday night in St. Paul.

MacKinnon has been the best player in the series, dominating the three games in Colorado with 10 points. He assisted on three of the five goals in Game 1, scored one and set up three more in Game 2, set up two and scored the overtime winner in Game 5.

“The best part is cheering with the guys in the huddle with you,” MacKinnon said of the winner. “My helmet got ripped off in the celebration, so it’s pretty exciting and it definitely ranks at the top of my list.”

The play began along the boards, where Ryan Wilson and Landeskog sabotaged the Wild’s attempt to clear the zone. From the left boards, Landeskog passed the puck to MacKinnon, who was skating through the left circle with Minnesota defenseman Marco Scandella between him and the net.

The rookie took the pass on his forehand, slid the puck around Scandella with his backhand, then returned to the forehand to rip a shot to the upper right corner of the goal. Hugging the opposite post against MacKinnon’s onslaught, Kuemper had no chance.

“I was kind of screaming for the puck from Landy,” MacKinnon said. “With Landy making a great heads-up play to me, Paulie good on the forecheck, I just kind of fired it on net and thankfully, I don’t know if it tipped off the defenseman or not, but I’m definitely very fortunate that it went in.

“There was a bit of a screen there, I thought. I don’t know if he really saw it or whatever happened. I don’t really remember the goal that well, to be honest with you. I blacked out. But it definitely was a very memorable goal and it definitely ranks at the top of my list.”

The Minnesota coach seemed to feel that justice demanded a right of appeal or something.

So far, the home team has won every game in the series, so I asked Yeo if the buildings really make that much difference. I forgot that he thinks his team outplayed the Avalanche in two of the three Colorado wins, except for those unfortunate last few minutes.

“I don’t know,” he said. “I mean, did it seem to in the third period? I would say that we were off our game for parts of the first two periods, but I thought for the most part . . . obviously, if things happen a little differently in the last minute and a half, then we’re not saying that. There’s no question that there’s probably more momentum swings, but for the most part I think that we’ve played two out of three pretty darn good games in here.”

In short, the State of Hockey seems to feel like it’s getting jobbed.

“I would say that we’re due for, I don’t want to say luck, but we’re due for some stuff here to go our way a little bit,” Yeo said.

By contrast, the Avs do not claim they played well enough to win in Minnesota, where they scored one goal in two games. They’ve scored 13 in three games at home.

“I think we learned a lot from the first two games [in St. Paul],” MacKinnon said. “We’re not going to be rushing the puck as much. We’re going to be very much more poised — making good plays, better on the forecheck and things like that. We’ve made some adjustments since the last game in Minnesota.”

“The first two games were bad games and we’ve got to bring in a good performance Monday night,” said Stastny, his linemate.

The biggest change for Game 6 might be giving the MacKinnon-Stastny-Landeskog line a little help. Matt Duchene, the Avs’ leading scorer during the regular season, may be ready to return from his knee injury.

“We’re going to take a serious look at it,” Roy said.

Dave Krieger is a recidivist newspaperman. END_OF_DOCUMENT_TOKEN_TO_BE_REPLACED
This entry was posted on Sunday, April 27th, 2014 at 5:31 am and tagged with Darcy Kuemper, Gabriel Landeskog, Marco Scandella, Matt Duchene, Mike Yeo, Nathan MacKinnon, Patrick Roy, Paul Stastny, Ryan Wilson, Semyon Varlamov and posted in Avalanche/NHL. You can follow any responses to this entry through the RSS 2.0 feed.
« Treading water
End of the line »