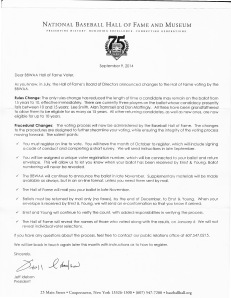 In my snail mail this week was a letter from the Baseball Hall of Fame dated Sept. 9, reproduced above, in which it outlined changes in voting procedures beginning with this fall’s balloting for the class of 2015.

The two biggest changes are the length of time a player may remain on the ballot (down to 10 years from 15) and administration of the voting, which is being moved from the Baseball Writers Association of America to the accounting firm Ernst & Young.

Three players already beyond their tenth year on the ballot have been grandfathered in and will remain on the ballot for 15 years, assuming they aren’t elected prior to that — Lee Smith, Alan Trammell and Don Mattingly. The one quibble I have with this transition is the effect it has on players nearing the new 10-year limit, namely Mark McGwire and Tim Raines. McGwire, in his ninth year on the ballot, will actually be kicked off before Smith, in his 13th. That doesn’t seem right.

The timing of the changes is especially unfortunate for Raines, who was making steady progress, from 24 percent of the vote in 2008 to 52 percent in 2013. In a four-year period, from 2013 through 2016, an unusually star-studded wave of newly-eligible players came along — Craig Biggio, Barry Bonds, Roger Clemens, Mike Piazza, Curt Schilling and Sammy Sosa in 2013; Tom Glavine, Jeff Kent, Greg Maddux, Mike Mussina and Frank Thomas in 2014; Randy Johnson, Pedro Martinez, Gary Sheffield and John Smoltz in 2015. The wave culminates with Ken Griffey Jr. in 2016.

Under the old rules, Raines might have ridden out this wave and then resumed his assault on a Bert Blyleven-like renaissance near or at the end of his eligibility. Cutting his remaining eligibility in one fell swoop from eight years to three dramatically reduces the possibility of his being elected. As a Raines voter, I can only hope some version of the veterans committee rights this wrong in the future.

The rest of the procedural changes are mainly to bring more seriousness to the voting process after last year’s instance of an eligible voter offloading his vote to ineligible voters. Whatever you think of the voting bloc, it is to be expected that the Hall would want to control who gets to vote. Commitment to a code of conduct will now accompany voter registration.

The process is brought into the electronic age with online registration and research materials but remains in the Pony Express days with actual submission of ballots by snail mail. The Heisman Trophy has had electronic voting for some time now, so I assume Ernst & Young will ultimately employ this innovation as well. But not yet.

From the standpoint of voters, the new procedure offers the innovation of confirming receipt, never before available because the BBWAA didn’t open ballots until it was time to count them, by which time it would be too late to replace a ballot lost in the mail anyway.

There is no change to the much-discussed limit of 10 votes per voter. Many voters expressed regret that they could not vote for more than 10 last year. I was one of them. I left Curt Schilling and Mike Mussina off my 2014 ballot because I was not willing to abandon candidates I had supported longer — including Raines, Trammell and Jack Morris.

The 10-year eligibility limit will turn over the names more quickly, reducing this ballot congestion problem to some extent, but off the top of my head I can name more than 10 players I’d like to vote for this year.

Here’s a look, courtesy of Baseball Reference, at 2015 eligibles.

One response to “New Baseball Hall of Fame voting rules”