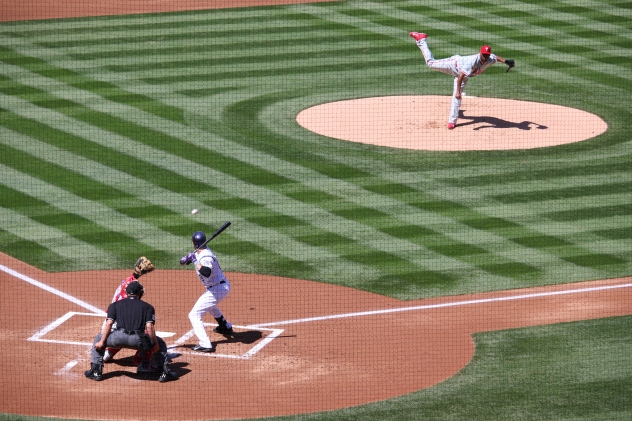 Center fielder Charlie Blackmon has been an early bright spot for the Rocks, sharing the National League batting lead with an average of .406 through the first 20 games.

It was one of those Colorado days Sunday at the ballyard. Bright blue sky, big crowd, lots of hits, lots of runs, no discernible sign of professional pitching.

This was in marked contrast to the Rockies’ three previous games — the finale of the last road trip in San Diego and the first two home games against the Phillies — in which they got shockingly good pitching, putting together their first three-game winning streak of the season by scores of 3-1, 12-1 and 3-1.

This is really the only question that matters about the 2014 edition of the Rocks. If they pitch like that even half the time, they will be pretty good. If they don’t, they won’t.

“Yeah, the game tends to fall into place when you get starting pitching,” manager Walt Weiss said before Sunday’s game when I asked him about that three-game stretch.

“That’s the key to this game. I don’t care what level you’re playing at. You get good starting pitching, you’re usually in good shape. We’ve had some guys step up. We’re talking about missing three of the top guys in our rotation to start the season. I think if you did that to any rotation in baseball, it’d be a challenge. So the fact that we’ve had guys step up and respond to the call has been really encouraging to me. And one of those guys is the guy that threw (Saturday) night, Jordan Lyles. He’s really been giving us a shot in the arm.”

Through 20 games, or 13 percent of the season, the Rocks are 10-10, and their team stats are pretty much what we’ve come to expect. At home, in the most hitter-friendly ballpark in baseball, they’re a sensational offensive team, batting .354. Their OPS of .978 is 160 points higher than the next best home team.

On the road, they’re a mediocre to poor offense, their team OPS of .662 ranking 20th among the 30 big league clubs.

Troy Tulowitzki is batting .667 at home with two homers and 10 runs batted in. He’s batting .229 on the road with no homers and two RBI.

As anyone who has followed the Rockies for any appreciable amount of time knows, numbers such as these are an occupational hazard of playing here. The home numbers are inflated by the Coors Field factor and the road numbers are depressed by the increased movement of pitches at or near sea level and the constant adjustment Rockies hitters must make as they switch elevations throughout the season.

You might expect the reverse effect on their pitching numbers, and over large sample sizes and multiple years, you get it. But so far this year, they’re actually pitching better at Coors Field than on the road with a home earned-run average of 3.78 and road ERA of 4.55. For individual pitchers, of course, the sample size so far is ridiculously small.

The most encouraging single development, by far, has been the work of Lyles, as Weiss noted. He would not even be in the rotation if it weren’t for a sore hamstring that kept Tyler Chatwood from making his first couple of starts. Unaffected by Coors Field and its reputation for driving pitchers insane, Lyles has thrown his power sinker and big breaking curve ball at elevation with considerable early success, giving up one earned run in 13 2/3 innings for a home ERA of 0.66. He and Chatwood have been the Rockies’ only reliable starters so far.

As Weiss noted, the pitching staff remains a work in progress due to injury. Jhoulys Chacin, a 14-game winner last year, has yet to make his first start as he works his way back from shoulder stiffness in the spring. Brett Anderson, acquired from Oakland during the offseason along with a history of being prone to injury, broke a finger hitting a ground ball and is out at least a month after making just three starts. De La Rosa, a 16-game winner a year ago, has yet to find his groove, although his most recent start, his fourth of the season, was his best. Juan Nicasio and Franklin Morales have been predictably unpredictable.

The bullpen has been very good for stretches and very bad for stretches. Sunday, with a chance to sweep a series for the first time this season, it gave up five runs to the Phillies in four innings of work. Matt Belisle took the loss, but Boone Logan had the worst day, surrendering three runs, two earned, and retiring just one batter, as the Rocks fell 10-9.

Despite what looks like a sensational defensive team on paper, they are in the middle of the pack with 12 errors in 20 games, three of them at the catcher position, and that doesn’t include two run-scoring passed balls by backup Jordan Pacheco in just five games wearing the gear. It’s nice to have guys who can hit behind the plate, but so far the poor defense has more than made up for the offensive contributions of Pacheco and Wilin Rosario.

The much-maligned Dexter Fowler trade is working out pretty well so far. It produced their best starter to date in Lyles, and it freed up the money to sign free agent Justin Morneau, who looks like a classic Coors Field reclamation project in the tradition of Andres Galarraga and Dante Bichette. Morneau is batting .364 and leads the club in RBI with 15 in the early going. He’s also avoided the dramatic splits, batting .367 at Coors and .324 elsewhere.

The fragility of their star players was a big factor in last season’s long, slow-motion collapse, and it’s already been an issue this year. Tulowitzki, Gonzalez and Cuddyer have already missed time with leg issues, a troublesome sign. It might be time to bring in a yoga instructor.

It’s early, of course. April numbers are overly examined because they’re the only numbers we have when everybody is still excited about the possibilities. Last year the Rocks went 16-11 in April and finished 74-88.

When I asked Weiss if he liked where his team is through 20 games, this is what he said:

“I like our club. I like the mentality of our club. I think our guys will fight through the tough stuff and I think that’s the X factor in this league. And I think we have that. So, yeah, I like where we’re at.”

So far, the Rocks are who we thought they were — a big-time offense at home, a small-time offense on the road and mediocre on the mound pretty much everywhere, except for that promising stretch of three games at the end of last week. If Chacin returns soon, De La Rosa finds his form and Lyles and Chatwood continue what they’ve started, the pitching could be better than mediocre. If the hitting stars can stay on the field and learn to play more situational ball on the road, the offense could be more consistently productive.

That’s a lot of ifs. The promise is there, but that’s still all it is.